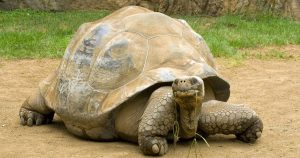 We all know and love the Galapagos Tortoise, they are cute and different but oddly misunderstood creatures, this article will show you some of the interesting facts about the gentle giants known as Galapagos Tortoise regarding their eating, life span and what they are in general.

What is a Galapagos Tortoise?

They have been around since 1835 and the oldest one lived to be 152 according to the records, they are the world’s largest living tortoises some of which have grown over 5 feet in length and 550 pounds.

Currently there are only 11 different types left and are on the endangered species list and have been protected by the Ecuadorian government since 1970. They live an easy going life by grazing on grass or leaves, baking in the sun and sleeping for almost 16 hours a day.

What do they eat?

When it comes to their eating habits they are quite fussy, they won’t necessarily eat anything. They are herbivores that mostly eat leafy plants, flowers and fruits, they normally consume around 80 pounds of food per day.

Because they eat slowly and have a slow metabolism it can take them a few hours to complete their meals and digestion, a lot of their food lacks nutrition so it doesn’t take long for them to become hungry again.

How do they reproduce?

They are able to mate anytime throughout the year, they prefer the cool and wet days over days that are dry or humid. Sometimes the males tend to be rather aggressive when it comes to winning the right to be able to mate with the females.

Their fights become rather rough to include biting amongst each other and they will generally continue to fight until one of them walks away in defeat, once the male and female have completed mating, the female then needs to start on her journey to a safe area where she can lay her eggs.

The eggs have to be placed in a space that is high away from flooding, once she has found a good location she will dig a hole and bury up to more or less 16 eggs.

The babies remain in the nest until they are about 4-8 months old depending on the temperatures, unfortunately most of the eggs that are laid will be found and devoured by any other predators

How have they adapted over the years?

The evolution of the Galapagos Tortoise

They have two different shapes, both adapted to different living circumstances and feeding habits, these are based on low areas opposed to high areas.

Some of them have shells that rise in the front almost shaped like a saddle, this makes it easier for them to raise their heads and reach cactus trees or resolve disputes, and they raise their heads often during social interactions as well.

Others have a dome shape, these tortoises live on islands where there is a lot of plants and other vegetation available for them to feed on that is close to the ground, this shape and habitat makes it less necessary for them to have to raise their heads in order to feed or resolve disputes.